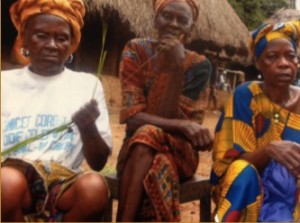 You have recently seen Sierra Leone in the news due to the Ebola outbreak that to date has killed 2500 people.

Decades of poverty, illiteracy, war, lack of safe drinking water and sanitation, overcrowded housing, and little access to healthcare create the perfect storm for an epidemic. Sierra Leone is vulnerable to a disease outbreak due to poor social determinants of health and decades of structural violence.

Social determinants of health are the conditions a person is born into that affect their health. These are powerful indicators of a person’s quality and quantity of life. A child born in Japan has a chance of living 43 years longer than a child born in Sierra Leone simply because of the environment in which they live.

The Jawei Chiefdom of southeastern Sierra Leone is located on the border of Liberia. Ebola hit the Chiefdom in May and spread quickly due to the poverty and lack of health care services. Jawei was one of the first regions to experience the outbreak and one of the hardest hit areas with high death rates and almost total loss of their trained health center staff and midwives.

Even with the help of NGOS, Doctors Without Borders, and the UN, no one could stop the spread of the disease. In an effort to save their communities the tribal chiefs and National Parliamentary Representative took matters into their own hands. They went door-to-door, as respected and trusted elders of their communities, to educate each household and create protocols and by-laws on Ebola prevention, treatment, and recovery.

The Jawei Chiefdom is now Ebola free with no new cases since September while the epidemic continues to rage in much of the country where communities are waiting for outside aide. The successful recovery of Jawei is attributed to local level collaboration and leadership that used local resources and systems of governance. Their recovery is not attributed to outside aide. The strength of their empowered self-reliance literally saved their lives. Now other regions in Sierra Leone are looking to the Jawei Chiefdom as a model of local level action in an epidemic.

The 100 households affected by Ebola had to burn all of their clothing, bedding, and household possessions. Communities are also experiencing serious food insecurity due to in-country travel restrictions, inability to farm, and economic crisis. The National Parliamentary Representative of Jawei has contacted the Sukuli Project, a local group that operates in Sierra Leone, asking for assistance. Sukuli accepted their request and is now working with our American partners, and Chiefdom leaders, elders, and representatives to replace household possessions and provide food for the households affected.

OHSU’s Nursing Students Without Borders are holding a fundraising event for the Jawei Chiefdom on January 16th at 6:30 pm in the Stevens Union Room 319. Sudy Storm, MPH, Midwife, and founder of the Sukuli Project will present ‘The Social Inequity of Ebola: How A Local Community Saved Themselves’.

Tickets to the event are on a sliding scale starting at $20.00. This includes a presentation, a ceramic bowl with soup, and raffle ticket for a hand sewn Jawei blanket.

100% of the proceeds will go directly to the Jawei Chiefdom for the families of Ebola victims and survivors.