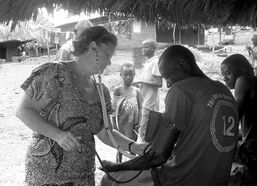 I had the opportunity to work with Sudy Storm in Sierra Leone during the summer of 2011 and witnessed first-hand the change that she was facilitating. Sudy is the founder of the Sukuli Project, operating in remote villages in this West African country since 2008. Sudy first traveled to Sierra Leone in 2001 as a midwife to help improve maternity outcomes. She remains committed to assisting Traditional Birth Attendants and other health care workers to reduce the number of women and babies dying in childbirth.

Sierra Leone has some of the highest infant mortality and maternal morbidity rates in the world. Forty-five percent of all children are expected to die before the age of five. These deaths are caused by many factors, including the severe shortage of medical care, scarcity of medications and educational opportunities.

Sudy believes that maternal-infant outcomes are indicators of the health of the community and cannot be treated separately. Therefore, she takes a holistic approach and addresses multiple factors affecting community health. Sudy has created educational opportunities for village women and children, including training some women as lactation consultants to encourage breastfeeding, and other training for traditional midwives & clinic health workers. The Project has also built latrines and water wells where there was no safe drinking water, donated school supplies, and helped create farm coops.

The Sukuli Project has collected extensive census and demographic data while conducting door-to-door surveys to identify the unique factors associated with high mortality rates. Most importantly, Sudy and her team utilize a partnership approach that involves community members at every step, including decision-making and ownership.

The Sukuli (School) Project’s current focus is the construction of a primary school in Nyanyahun that will serve several villages. The project was the idea of Sudy’s young granddaughter. Sukuli is raising funds for the roof, cement, furniture, teaching materials and certification of teachers. The villagers will provide the labor for construction. To learn more about the Sukuli Project and make a donation, please visit: http://www.themoonlodge.biz/sukuli.html.

We also invite you to listen to an inspiring recent interview with Sudy Storm and two other project directors from our Healthy, Compassionate Birthing network: https://www.dropbox.com/s/1p4ftmwzeoxhpwg/HealthyBirthingWebinar.mp3.

1 thought on “The Sukuli Project: A Holistic Approach to Maternal-Infant Health”