A group of artists in Los Angeles County express their art by creating California’s first public fruit park, and linking up with other “fruit activists” in a growing movement to make a difference for people in “food desert” urban areas across the U.S. 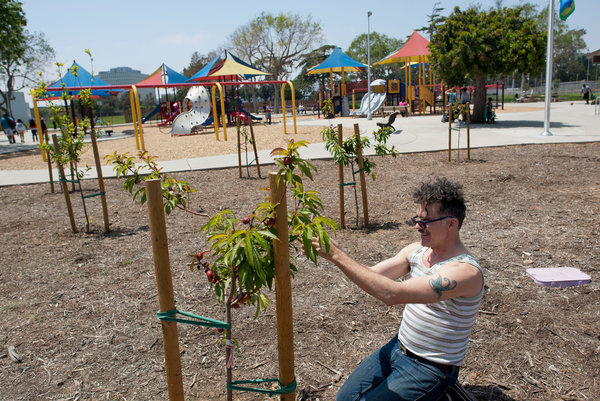 DEL AIRE, Calif. — Fruit looms large in the California psyche. Since the 1800s, dewy images of oranges, lemons and other fruits have been a lure for seekers of the state’s postcard essence, symbols of fertile land, felicitous climate and the possibilities of pleasure.

Now a cheeky trio of artists have turned fruit trees into cultural symbols as well. The group, known as Fallen Fruit, recently planted what is being billed as the state’s first public fruit park in an unincorporated community with neatly clipped lawns outside Los Angeles.

The park is part of a growing “fruit activist” movement, a variation on a theme of urban agriculture. The Los Angeles County Arts Commissioninitiated the project to “fulfill a civic purpose,” said Laura Zucker, the commission’s executive director, addressing the public-health advantage for communities that are so-called food deserts, with few stores and healthy restaurants.

“They give endlessly and don’t ask for anything in return,” Austin Young, one of Fallen Fruit’s members, said of the fruit trees that make up the group’s latest “art piece” — a fledgling orchard of Tropic Snow white peaches, Mariposa plums and other trees installed alongside swing sets and basketball hoops here in Del Aire Park.

Fallen Fruit, which also comprises Matias Viegener and David Allen Burns, has become well known among art and culinary cognoscenti here and across social media. One of the group’s first activities was mapping publicly accessible fruit trees in Silver Lake and other Los Angeles neighborhoods, including private trees with succulent fruit tantalizingly draped over public rights of way.

For the complete article, see Tasty & Subversive Too!